Right from the start, the new series immediately sets the tone for what we should expect within its opening minutes. If you’re uncomfortable with hunting, this will not be a series that I would recommend you watch. Put it this way: this is a series that means business straight from the get-go.

What’s not new is that violence has always followed the Dutton family. The opening narration informs audiences that it’s followed them from the Scottish highlands to the slums of Dublin. It followed them to the beaches of New Jersey all the way to Shiloh and Antietam during the Civil War. And now, the family deals with violence once again in the American West. Anyway, thirty years have passed since settling the Yellowstone ranch in 1883. Jacob (Harrison Ford) and Cara Dutton (Helen Mirren) are the new patriarch and matriarch of the family since arriving to Yellowstone in 1894.

Elsa Dutton (Isabel May) returns to narrate the series–she is the only one not on screen during the opening titles. What we know is her father had three children and only one of them would live to see their children grow. Only one of them would carry their family’s fate through the Great Depression. One would think that this would be John Dutton Sr. (James Badge Dale), right? However, Spencer (Brandon Sklenar) is on screen during the narration. The WWI veteran is hunting somewhere in Africa. Cara misses him tremendously so maybe he’ll come home sooner than later. Time will certainly tell.

You’d think we’d be introduced to Harrison Ford’s Jacob immediately but no, 1923 makes us wait a few minutes for his long-awaited role on TV as a series regular. Ford will also be starring in Apple TV+’s Shrinking in late January. What we know from the narration is that the child’s mother had begged Jacob to come to Yellowstone upon her husband’s death and begged him to bring his family to their land and save hers. Upon his arrival a year later, Jacob would take the boys in. Jacob and Cara raised those children as his own and made their father’s dream a reality. It’s sad to learn of James and Margaret Dutton’s fates since 1883. 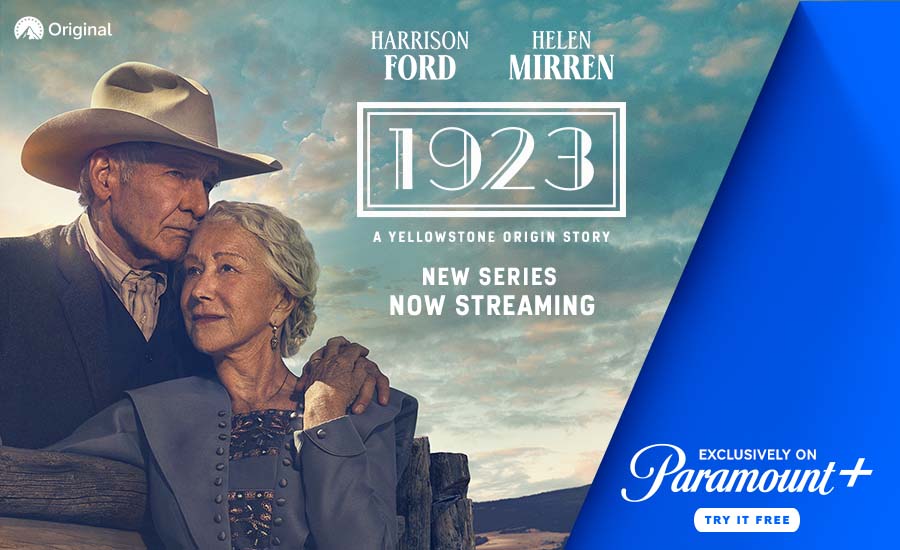 In the series premiere, Jacob has to take care of a dispute between cattle ranchers and Banner Creighton’s (Jerome Flynn) sheep herders. Meanwhile, Cara has the responsibility of informing Elizabeth “Liz” Strafford (Michelle Randolph) what it means to marry into the Dutton family–in this instance, Jack Dutton (Darren Mann), son of John Dutton Sr. and Emma Dutton (Marley Shelton).

Outside of the Dutton family, the series premiere introduces us to Teonna (Aminah Nieves), a Native American living at a government residential boarding school. Sister Mary (Jennifer Ehle) teaches the students while Father Renaud (Sebastian Roché) serves as the headmaster. I expect she’ll run off and possibly cross paths with the Duttons at some point.

What we know is that 1923 will be a two-season show. The Great Depression will hit Montana during the Roaring 20s, too, which is why the show is going to tackle it. I was always taught that the Depression followed the stock market crash so I’m curious if this happened in real life or just for the series. I’ll be curious to see how they play the end of Prohibition into the series. We also know that the start of the series is a few years after the flu epidemic.

I’m curious to see the direction that the series goes over its eight episodes. Unlike other Paramount+ series, press only received the first episode. It would be nice to watch a few more episodes to see what Taylor Sheridan is trying to do here. I’ll be curious to see which characters end up standing out by the time the first season is over. But for what it’s worth, Harrison Ford and Helen Mirren have the necessary chemistry on screen. Plus, you can never go wrong with Breton Vivian and Brian Tyler, who deliver a solid score as usual.

Please subscribe to Solzy at the Movies on Substack.

Danielle Solzman is native of Louisville, KY, and holds a BA in Public Relations from Northern Kentucky University and a MA in Media Communications from Webster University. She roots for her beloved Kentucky Wildcats, St. Louis Cardinals, Indianapolis Colts, and Boston Celtics. Living less than a mile away from Wrigley Field in Chicago, she is an active reader (sports/entertainment/history/biographies/select fiction) and involved with the Chicago improv scene. She also sees many movies and reviews them. She has previously written for Redbird Rants, Wildcat Blue Nation, and Hidden Remote/Flicksided. From April 2016 through May 2017, her film reviews can be found on Creators.